I’ve decided to retire this blog and replace it with a more extensive website that tells a little more about me and introduces my forthcoming book The Sound of a Million Dreams (InterVarsity Press, March 2017).

For those of you who have a followed a long with some of my posts over the last few years, thanks for your friendship, comments and encouragement. If you’re finding yourself here for the first time, thanks for stopping by.

Whatever the case,  I hope you’ll visit me at my new website www.suannecamfield.com and that we can get to know each other a little better there.

It’s been a month since I finished my manuscript. I’ve spent the last 30 days doing what I said I would do (and have looked forward to with great anticipation for more than a year) when I finally finished my book: nothing.

I’ve savored the freedom of the moments: instead of flipping open my laptop the second I sat down on the train, I opened my Bible to the book of Joshua. Instead of spending my Saturday morning tucked away in the home office shushing the clatter of my house, I baked banana chocolate chip muffins. Instead of heading to Starbucks during Sadie’s volleyball practice, I went shopping and bought a splendid little black dress.

I’ve read two books purely for fun, both of which my soul is still lingering over (to me the mark of a truly good book). The Boys in the Boat by  Daniel James Brown and Me Before You by Jojo Moyes (the latter I finished before bed last night; I’m still in a pocket of grief).

And every moment, I’ve fought the brooding lie that I was wasting time.

The full force of it barreled down over Memorial Day weekend, rushing to get out the door for Clay’s baseball tournament another state away. I shooed everyone out the door while I took one last inventory of all of our stuff. Chairs. Cooler. Kindle. Sunglasses. Phone. My eyes swept over the chair where my neon green computer bag rested, and I felt a pulse of anxiety at leaving it behind. I never went anywhere without my computer. Being the passenger on a long car ride or a bystander waiting for the game to start were drops of golden (writing) time.

Before I could change my mind, I turned on my heel and walked out the door, leaving the bag decidedly in its place. Instead of being irritated by too much chatter in the car while I tried to muster creative energy, I caught up with Eric on the events of his week; I bantered with the kids and flipped through some pages of my book. I stared out the window. When we got to the game an hour early, instead of sitting in the car trying to gain progress on a new chapter, leaving Sadie to stare endlessly at her phone, we drove 4 exits to a candy factory where we bought 3 species of gummy bears and gorged ourselves silly. 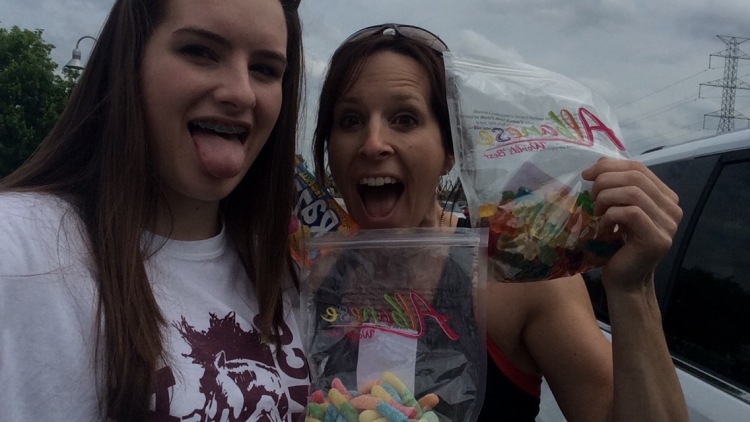 I suppose wasting time is all a matter of perspective. What we choose to do instead is often just as important.

As much as I’ve enjoyed the respite, I’m antsy about not having written much these last few weeks, much the way I feel when too much time has passed without talking to my sister or going to the gym. I’m taking that as a good sign — just the right mix of rest and discipline for the next time I have to choose writing instead once again.

It’s hard for me to believe it’s been two years since I’ve spent any time on this site.

It’s okay, though — all for good reason.

Shortly after I wrote my last blog post (in which I thought I’d start blogging more), I went to a writer’s conference where an editor asked me if I’d ever considered writing a book. It had been a dream of mine for years, but I wasn’t sure I was ready. I bluffed my way through the conversation, then drove home and got to work on figuring out what it was I finally wanted to say. I put together a book proposal, sent it off to the publisher and four months later, a yellow envelope showed up at my door — my book contract — and  I cried all the way to Sunday. This, the truncated version, of course.

Writing a book (at least in my mind) is akin to building one’s first house. It sounds exciting when you break ground (and it is), but you quickly start to realize how hard it actually is. Like way harder than you ever thought. And you quickly realize that you don’t actually know what you’re doing, so you find yourself in over your head multiple times before you get to the end . . . because you don’t actually know how to build a house. Because you’ve never actually done it.

That’s pretty much been my last two years.

Outside of work and being a mom, I’ve had my nose in a laptop. Writing on the train on the way to work, writing in my car waiting for my kids to finish practice, writing in coffee shops in the dawn of many Saturday mornings. Writing, writing, writing — in completely over my head — in every nook and cranny I could eek out of life. Until I finally finished building the house, fingers crossed that I didn’t make too many mistakes along the way. At least not the kind that would bring the whole house crashing to the ground, anyway.

Last week, I finished my final revisions. A few weeks before that, I got the official title from my editor: The Sound of a Million Dreams: Awakening to Who You Are Becoming (InterVarsity Press, Spring 2017).  Soon there will be a cover, another subtle reminder that this thing I began two years ago is not just some random conversation between me and my laptop that no one will ever read. This thing is actually happening. This thing will actually have windows and doors and a roof and a floor. This thing will become a book that someone, somewhere, will hold in their hands and potentially read — ready or not.

My next adventure will be turning this blog into a website and beginning to dip my toes into the world outside my own laptop and thoughts once again. I haven’t decided what that will look like yet, but I’m going to spend the next few months trying to figure it out. Wish me luck. It’s like starting to build a house all over again — in way over my head and toes and nose and fingertips — because it’s a different kind of house than the one I just built. Lord have mercy.

ps. I just updated the theme for this blog, but don’t have a photo for the top. Sorry it looks a little wonky. Just for now.

Last February, I attended the funeral of one of my best friend’s mom.

Vicki was the childhood friend whose house, outside of my own, I spent more time at than any other. I’d often catch the bus to her stop after school where her mom, Ginny, would be waiting at the kitchen table with a glass of iced tea or sitting in the living room, curtains pulled dark, ready for some real-time gossip on the latest episode of Guiding Light.

Ginny was what you might call my “second mom.” I’m sure you have one too.

She was the mom who came on field trips when my own mom had to work, who bandaged my knees when I wrecked my bike in her driveway, who let me tag along at family events. She was the mom who insisted we go to church after a Saturday night sleepover, who gave me a Bible for my 10th birthday and whose pastor first introduced me to Jesus. She was the mom who sat with me late one night as I cried over the loss of a favorite cat – and got my own mom on the phone to help calm me down. She’s the mom whose mac-and-cheese recipe my own kids beg for to this day.

As I write this, I acknowledge that nothing compares to the sacrifice of my own mom — the thankless, nitty gritty job of the every day, teaching, encouraging, instructing, loving and supporting. My mom is one of the greatest influences in my life and I’ll tell her so this Sunday.

But today, for whatever reason, I’m thinking about all the “second moms” — the women in our lives who have allowed us to sit at their dinner tables and sleep in their basements, who drove us to school dances and volunteered in our classrooms, who listened to us cry over boys and teachers and mean girls, who allowed us to raid their refrigerators (without so much as a thank you); who came to our weddings, sat through our baby showers and held the hand of our own moms as they watched us become women ourselves.

Most likely, they didn’t know they were making a difference. And they probably didn’t think we were paying much attention.

But they were. And so were we.

So happy Mother’s Day . . . to my mom, to my second moms and to all of the women — moms or not — who have taken the time to see beyond the busyness of their own lives and loved me as their own.

You are beautiful, cherished and absolutely amazing.

I read somewhere that you should never apologize for long periods of silence on your blog.

Work, kids, family, friends, a never-ending to-do list . . . it’s all the same stuff that makes finding time hard for everyone. For me it’s not only finding the time, it’s finding the energy — the creative space that writing takes when I actually have the time.

I’m convinced that getting those two things to match, whatever your passion, is one of the great challenges of life.

So over the last few months I’ve slugged through it, doing my best to find chunks of time to make the match. In the process, I’ve learned how difficult it is to listen to (or even find) the sound of your own voice when you haven’t heard it for a while.

And I can’t believe how much I’ve missed it.